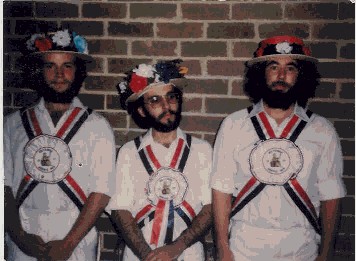 An early history of The Britannia Morris Men, as told by Simon Leverton.

In a recent street corner interview given late one evening to a passing social worker from the Salvation Army, Simon Leverton recounted his formative years in the Morris dancing fraternity, and how he came to create this thing we now call The Britannia Morris Men.

“I started with Plenty,” he began.

“And now look at you!” was the social worker’s rejoinder.

“No, no, that’s not what I meant,” said Leverton, raising himself up onto one elbow, whilst in the other arm he gently cradled a bottle of the finest local pinot, modestly wrapped in brown paper to conceal its vintage.

“Plenty Morris. It was a mixed side, probably still is. I was with them for about 2 years back in the late ’70s, under an inspirational squire called Geoff Welham. We had a ball, doing lots of gigs including Morris’s Winery in Rutherglen, folk festivals all over the place, and much more besides. We virtually had an A and B team, it was so popular. I learnt the steps mostly by doing busking spots in Bourke Street mall on Friday nights – mistakes weren’t easily noticed by the crowd. Or us for that matter.

“Unfortunately, Geoff got it in his head to relocate to Brisbane (perhaps he knew something we didn’t), and the side started to loose its umph. We didn’t quite fall about fighting, but there were some, shall we say, differences of opinion on style and, I suppose, substance.

“Anyway, I decided to move on and start up my own morris side. This was 1979. I was able to persuade two musician mates, Dave Rackham and Dave Alleway, to join me in what was to be a solo jig side (probably the first, and last, of its kind in the world – these were ground-breaking times you know).”

Leverton swigged deeply from the bottle, wiped his chin with his sleeve, belched and continued.

“I actually have a picture of us here, taken in May the following year, at what was to be our finest gig. We did two spots of solo jigs at an end of year Halls of Residence bush dance at La Trobe Uni – the cheers were deafening.”

A crumpled photo was retrieved from the inner recesses of his Helly Henson, and is reproduced below.

“Well, after the Great Schism,” he continued, “things went from great to brilliant. As it happened, there were a number of other men in Plenty who thought similarly to me, and certain discussions took place. I can’t give details here you understand, the 30 year rule and all that, but suffice to say within a very short time I was able to form a full side – the Britannia Morris Men had come to Melbourne!

“Our first gig is indelibly etched into what now passes for my memory,” he breathed, pausing to drain the bottle of all remaining residues.

“We were booked to do the Golden Square shopping centre in Bendigo, on a Saturday morning. This was no ordinary gig. They were paying us and everything, and there was travel and overnight accommodation involved too. The logistics of getting 6 morris men and myself to Bendigo in one piece, and on time, and ready to dance, at the agreed location, were simply staggering. As it happened, I achieved an 83.3% success rating for this enterprise – one little prick didn’t front. Not to be deterred, we did a set of 5-men morris dances, once again probably breaking new ground in the annals of morris history. When Chris finally turned up (Fitzroy bloke, thought it was next week) the morning shoppers were simply stunned into silence by the alacrity with which we seamlessly slipped into the traditional formation. It was all they could do to simply walk away slowly shaking their heads with incredulity.

“This was Britannia’s finest hour.

“Well, from there we just went from strength to strength, dancing wherever the mood and money took us. The lads danced my new house in, in Croydon. A dance in every room (I did a solo jig in the dunny, again probably a world first). We almost sank the Polly Woodside, as seen in the picture below.” 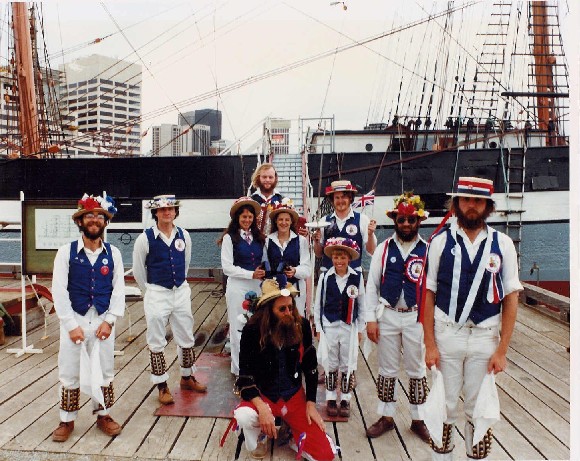 “From here, we had practically become a Melbourne fixture, so when we held our ale in… ’81 I think it was, the group photo taken at Queen Vic Market (and shown here below) says it all.” 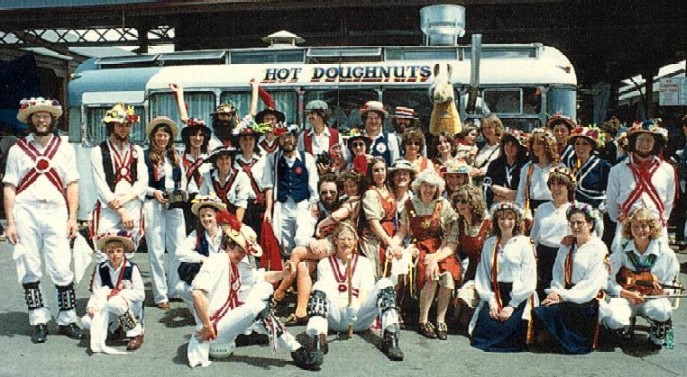 Leverton went on to relate how Britannia were soon to be voted in as collective Squires of the Australian Morris Ring, and the breath of fresh air they brought to that group with their rapier-like wit and repartee.

“Eventually I tired of the endless single malt tasting nights, the picnics at Fairfield boathouse, the fine wine and food, and the public opprobrium,” he sighed. “Others took over the reins, and I decided it was time to give the old body a rest.

“Soon after retiring from the side, a colourful and charismatic character by the name of Sir Cedric Blunt made himself known to me. We first met in a leafy Carlton laneway behind one of the local victuallers’ establishments, where we discovered our mutual interest in exploring the contents of dumpmasters and the promotion of glass recycling. I went on to become an environmental scientist, Cedric stuck with the dumpmasters.

“Cedric (he shuns the appellation, unless it can get him a complimentary brandy somewhere), like his sort-of namesake Cecil Sharp more than 100 years ago, has shown a deeply insightful understanding of the Morris, and has penned some notable publications on the matter. He was the first to witness and describe with anthropological precision the practice of ‘belting off’ common amongst Adelaide Morris Men late last century. He now resides in retirement at a stately mansion opposite the Gisborne cemetery, where he tends his wine cellar and still pops the top off the occasional dumpmaster, just for old time’s sake.”

With this, the interview ended and the scientist went back to tend his environmental monitoring equipment.

This site uses Akismet to reduce spam. Learn how your comment data is processed.

I believe this is what you call a 'day for it'

A glorious return to the Groin 🦵 We've missed

Looking forward to dancing at the Boroondara Farme

Hopping about in Queenscliff #morrisdancing #ozm

The Britannia Morris thanks @redravenmorris for th

Britannia Morris are out at @seaworkswilliamstown

And another wonderful jig performance for AJ to ea

Raising a toast to Drafty amongst good company

Up bright and early for a dance at @kellybrookwine

And big congratulations to Helen who performed a s

Dancing up the sun with @brandragonmorris and @red

As is tradition 🌤 Happy May Day! #morrisdancin